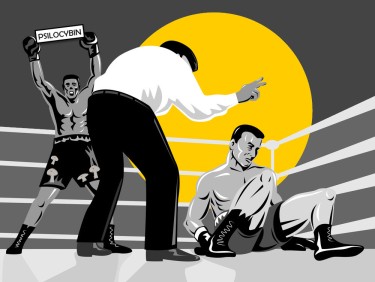 Psilocybin, the psychoactive compound found in numerous species of magic mushrooms, has been making headlines in the medical community over the last few years for its ability to treat many difficult mental illnesses. Depression is one of them.

According to the World Health Organization, depression is a common mental illness that some 3.8% of the global population suffers from. That’s around 280 million people worldwide struggling with a dreadful mental disease that can often have symptoms so debilitating that it can be tough to try and just make it through the day. It’s such a serious problem that the global anti-depressant industry is seen to be valued at $21,004.8 million come 2030, yet this type of medication is notorious for its numerous side effects including agitation, anxiety, diarrhea, insomnia, headaches, sexual problems, and much more.

Thanks to scientific research, we now have other options such as marijuana and magic mushrooms.

The use of magic mushrooms for treating depression is still new, but it has had incredible success with treating depression. Now, the biggest study of its kind to date has backed up what we know about it. Last May 21, the American Psychiatric Association (APA) annual meeting revealed the “largest, randomized, controlled, double-blind study of psilocybin therapy ever completed,” reads the press release.

Subjects were administered with one dose of either 25mg or 10mg COMP360 psilocybin among patients who had TRD (treatment-resistant depression). The symptoms were measured based on the Montgomery-Asberg depression rating scale (MADRS), a scale that has been around since 1979 helping psychiatrists gauge levels of sadness and inner tension. They found that the participants who were given 25mg of COMP360 psilocybin were found to have a “highly statistically significant reduction in symptoms of depression after three weeks.” In addition, their benefits lasted much longer too, they noted that for some of the participants, their depression scores were better for as long as three months.

Because of this, the scientists report that psilocybin offers “a rapid and durable response for up to 122 weeks.”

“Treatment-resistant depression is one of the biggest challenges we face in psychiatry, and chances of success decreases with each treatment that a patient tries,” explains David J. Hellerstein MD, the study’s Principal Investigator as well as a Professor of Clinical Psychiatry at the Columbia University Irving Medical Center. “It’s rare to see such positive outcomes of clinical trials in this disease area, which is why these results are so significant. I hope this represents a major step in finding new options for people living with treatment-resistant depression.”

“Our mission is all about developing mental health innovations through scientific evidence, which is why we’re so honored to present the largest study of its kind at the APA,” says Dr. Guy Goodwin. “In this study, a significant number of patients experienced improvement in their symptoms of depression after just a single dose of 25mg psilocybin with psychological support, with effects lasting for up to three months of the study. We now need to continue our research to understand if this can be replicated in even larger trials.”

The body of clinical research on psilocybin’s effects on severe and treatment-resistant depression continues to grow, with increasingly amazing results.

Another study whose results were released earlier this year found that individuals with major depression found relief from psilocybin treatment, some for a year or even more. For the trial, 19 adults who had a long history of severe depression were given 2 doses of psilocybin, and went through talk therapy.

After 12 months, 70% of the participants still had antidepressant responses while over half were in remission. “Psilocybin not only produces significant and immediate effects, it also has a long duration which suggests that it may be uniquely useful new treatment for depression,” explains Roland Griffiths, PhD. “Compared to standard antidepressants, which must be taken for long stretches of time, psilocybin has the potential to enduringly relieve the symptoms of depression with one or two treatments,” he adds.

Further, another study found that psilocybin helps the depressed brain by making it more flexible, which is different to how antidepressants work. Medical experts say that when the brain is depressed, brain activity patterns are restricted and rigid. However, this is where psilocybin helps, improving the brain’s flexibility, reports The Guardian.

“These findings are important because for the first time we find that psilocybin works differently from conventional antidepressants, making the brain more flexible and fluid, and less entrenched in the negative thinking patterns associated with depression,” says Professor David Nutt, who heads the Imperial Centre for Psychedelic Research. “This supports our initial predictions and confirms psilocybin could be a real alternative approach to depression treatments,” he says.

“The effect seen with psilocybin is consistent across two studies related to people getting better, and was not seen with a conventional antidepressant,” adds Professor Robin Carhart-Harris, the research paper’s senior author. “In previous studies we had seen a similar effect in the brain when people were scanned whilst on a psychedelic, but here we’re seeing it weeks after treatment for depression, which suggests a carryover of the acute drug action.”

Psilocybin has numerous mental health benefits, and magic mushrooms have been rated as the safest recreational drug. With all these advantages, patients suffering from various mental health disorders can count on psilocybin treatments for depression, PTSD, and much more.

PSILOCYBIN MUSHROOMS FOR DEPRESSION, WHAT WE NOW KNOW!